Gordon James Klingenschmitt (aka “Dr. Chaps”), earned his PhD in Theology at Regent University, who also holds Doctor of 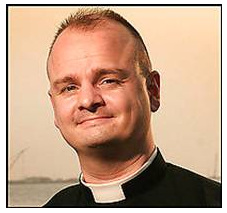 Divinity, MBA, M.Div, and B.S. Political Science degrees. A graduate of the Air Force Academy, he is now a motivational speaker, and former U.S. Navy Chaplain who made national headlines and was vindicated by Congress after he took a stand for the rights of military chaplains to pray publicly “in Jesus’ name.”  By sacrificing his own 16-year career and a million dollar pension, by demanding his own court martial for the “crime” of worshiping in public, he inspired 300,000 petitioners, 85% of polled voters, 35 pro-family groups, and 75 Congressmen who mobilized to overturn the national military “non-sectarian prayer” policy, restoring the rights of military chaplains of all faiths to pray publicly, in uniform, according to the dictates of their conscience, even if they pray “in Jesus’ name.”  His national petition organization, The Pray In Jesus Name Project, has delivered 4.5 million fax petitions to Congress supporting pro-life, pro-marriage, and pro-freedom causes, and overturned government bans in 8 states restoring your right to pray “in Jesus name” in public settings.