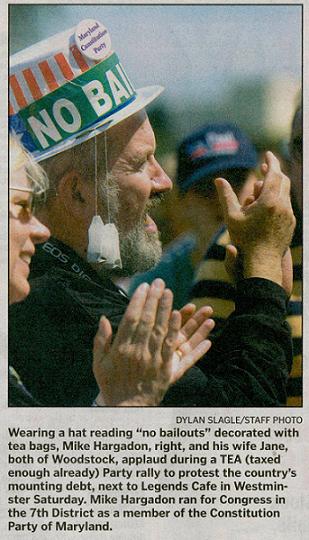 This Picture is of LWRN Host Mike Hargadon and wife Jane, participating in the Westminster, Maryland 4th of July TEA Party.

The following is the Carroll County Times article:

Hundreds of drivers honked their horns on Md. 140 Saturday morning, but it wasn't because of snarling traffic.
Instead, the honks were a show of support for sign-waving demonstrators gathered along the shoulder of Md. 140 near the intersection of Gorsuch Road in Westminster.
The demonstrators were taking part in Westminster's TEA Party Day.
TEA stands for taxed enough already. The Westminster event featured comments from conservative speakers, followed by an enthusiastic gathering along Md. 140.
The TEA party was part of a national movement to protest the spending of trillions of dollars by the federal government.
About 400 supporters carrying American flags and signs were drawn to the event.
They applauded speakers expressing outrage over government spending and laughed when their display of signs drew one honk after the next.
Harold Owen, of Elders-burg, was among the most enthusiastic sign wavers.
His sign asked drivers to "Honk if I'm paying
a. Your mortgage
b. Car payment
c. Tuition
d. Insurance."
His sign was a not-so-subtle hint that he felt he was paying too much in taxes.
At one point, Owen sprinted across Md. 140 to wave his sign in the median.
"I think a lot of people have a general frustration with the federal government," Owen said when asked why he felt so many people were honking.
John Orlando, the chairman of the Republican Liberty caucus, spoke at the event, highlighting his concerns about the federal government trying to take control of all American waterways.
Orlando, of Annapolis, said he was impressed by the turnout and felt that many in the community were upset by excessive government spending.
"It shows that the American people are tired of it," he said.